For this installment in our LGBTQ+ acronym series, we talk about the letter “Q.” The “Q” stands for queer and questioning. While this letter stands for both these terms, these words are defined separately.

The term “queer” means any person who doesn’t identify under rigid binaries. For example, these can include straight/gay or female/male.

This word was previously known as a degrading slur for being gay. Some folks have reclaimed it within the LGBTQ+ community. It is now used as a self-affirming umbrella term. It is especially useful for those who feel confined by labels. However, some people still consider it a slur and opposite it. It’s always best to ask when communicating with someone. It’s never okay to label someone’s sexuality. You’ll want to double-check how someone identifies or uses the term first.

It is an act of respect and consideration to be conscious of an individuals’ feelings regarding terminology and labels. The word queer, whether used within the phrase genderqueer or used on its own, must only refer to people who identify this way. Then, if you come across a person offended by the term, you can explain that it reflects and honors this person’s identity.

Questioning is when a person is in the process of discovery for gender identity or expression, their sexual orientation, or all of the above. It can also mean anyone who has not defined these aspects about themselves.

In essence, folks who are questioning have a feeling they might identify as something other than cisgender and straight and be in the process of exploring their identity. Many people use the term questioning because they can still be a part of the LGBTQ+ community without having to stick to a label.

Adolescence is a time where many young people experiment. They can become aware of sexual feelings, which is an essential aspect of development. Sometimes these youths can have feelings towards people of their gender or another gender identity. These feelings or experiences can create confusion and lead to the questioning process. As time goes on, their gender identity and sexual orientation will become more clear. However, everyone is unique and goes through this stage at any age, and the outcome will be different for each individual.

Both gender identity and sexual orientation are equally important for a person’s development. Questioning is an essential step since navigating sexuality can come into play in many ways. For instance, if someone identifies they had gay experiences but also enjoys sexual interactions with different gender identity, then they may consider identifying as bisexual or pansexual and may not feel like they are 100% gay. Also, a person may not have had any or few sexual interactions with a different or same gender but still, know how they identify.

Support and Help for Folks Who Are Questioning

The social factor is significant when it comes to questioning individuals, especially youth. Those who are questioning may feel that they are in an unsafe environment and can’t fully explore their gender or sexuality. Social acceptance from their peers and loved ones is essential, especially to give them a sense of belonging. As a result, the fear of rejection can keep questioning individuals from establishing their authentic identity.

Since many young people go through this questioning process, there are my resources out there for them. That way, they can navigate this path with less fear of being discriminated against or rejected by those closest to them.

The LGBTQ+ community has developed support groups in various communities, help centers, and safe online spaces to help youths looking for guidance. These tools also provide information about a person questioning their gender identity and sexual orientation. Questioning individuals can also talk to a counselor, online community forums, and suicide prevents helplines. Some of these resources for LGBTQ+ youths include The Trevor Project, which provides a lifeline, chat, text, and support center.

Should the Two “Q” Letters Be Used for Messaging?

The acronym only uses one “Q” to signify queer or questioning, queer and questioning, and queer/questioning. Some insist that this letter stands for “questioning.” They believe it represents folks who are uncertain of their sexual gender identity. On the other hand, some people believe it is for “queer.” They use it as a catchall term to reclaim acceptance instead of its derogatory origin. Some people accept both definitions. However, the letter “Q” has only one letter within the acronym to represent both identities.

Why Does Q Belong in the Acronym?

As the letters in the LGBTQ+ acronym continue to grow, making sure the community is as inclusive as possible is essential. Every single people deserves to be represented and not have their voices silenced or not prioritized.

The “Q” letter is so important because various individuals feel that it encompasses a significant group of people who don’t solely identify by the L, G, B, or T letters (lesbian, gay, bisexual, transgender letters). For example, folks who identify across the gender spectrum or sexual minorities like asexuality or demisexuality. All identities belong in the LGBTQ+ community. The words “queer” and “questioning” speak to all the varying identities. That way, no one is excluded from the community.

All in all, the words “queer” and “questioning” amplify the voices of many marginalized identities within the LGBTQ+ communities. Inclusion is essential for every group within the community, as well as representation. That way, individuals will have better self-esteem and mental health outcomes and feel less isolated. 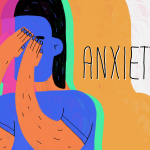 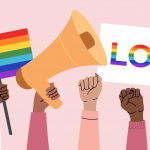