Menu
Search
social media has made it much easier for allies to learn more about the community, and most importantly, it has given them another avenue to practice their allyship

Being an ally toward those in the LGBTQ+ community can seem tricky. Whether it’s consistently resharing information to educate the public or attending Pride Month events to lift and strengthen the community, there are many ways that allyship can take form. According to the Merriam-Webster dictionary, allyship provides assistance and support in an ongoing effort, activity, or struggle.

Thankfully, social media has made it much easier for allies to learn more about the community, and most importantly, it has given them another avenue to practice their allyship.

How to Be an Ally on Social Media

Being an ally is a constant work in progress, so whether you’ve been an ally for years or are planning to be more active, here are some things you can do to improve and get started.

Listen to their perspectives

One of the easiest ways to start becoming a better ally on social media is to listen to the many different perspectives that those in the LGBTQ+ community have. To do this, you could start by following other accounts on Instagram, Facebook, and even TikTok that share stories about people from different ethnicities in the community.

By doing this, you’re exposing yourself to many different perspectives. It’s also essential to realize that the LGTBQ+ community is rich with various identities, and everyone has a different experience. Hence, it’s necessary to hear and get to know these stories.

Ask educated questions or do your research

This goes hand in hand with the previous point. Once you’ve learned about the experiences those in the community have, it’s always wise to ask questions to learn more. However, it’s essential to do so tactfully and avoid asking questions that could bring up past trauma and hurt.

As far as possible, try to do your research about various issues and concepts that you find difficult to understand.

Cyberbullying is a prevalent issue that affects anyone online, especially on social media. However, studies show that youth in the LGBTQ+ community is particularly vulnerable to cyberbullying on social media compared to their heterosexual friends.

In 2020, CNN reported that LGBTQ+ youth who have died by suicide are about five times more likely to mention bullying in their lives compared to cisgender individuals.

As an ally, it’s essential to understand this and know what you can do if you spot the signs of cyberbullying.

Generally, you should avoid engaging with the bully online as they might further lash out at their victim. Instead, here’s what you can do:

Remember, by being passive; you’re indirectly supporting the bully and encouraging them to continue with their actions.

Speak up for the community

If you see a post, picture, or video offensive or damaging to the community, speak up and point out the problem. Perhaps, you can leave a comment for the creator telling them why their content is problematic and suggest what they can do to improve on it.

If the creator starts to get aggressive, report and block them.

Let your LGBTQ+ friend show you the way

Get involved in real life

Now that allies are open about their allyship and support towards the community on social media, why stop there?

Whether it’s supporting Pride events, donating, or mentoring, there are many ways that allies can help the LGTBQ+ community with their privilege.

Here are some things allies can do in real life:

There are multiple ways to be an ally for the LGTBQ+ community. It’s vital that, as allies, people want to improve their methods of supporting the community and continue learning about the issues they’re going through. 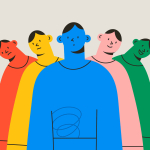