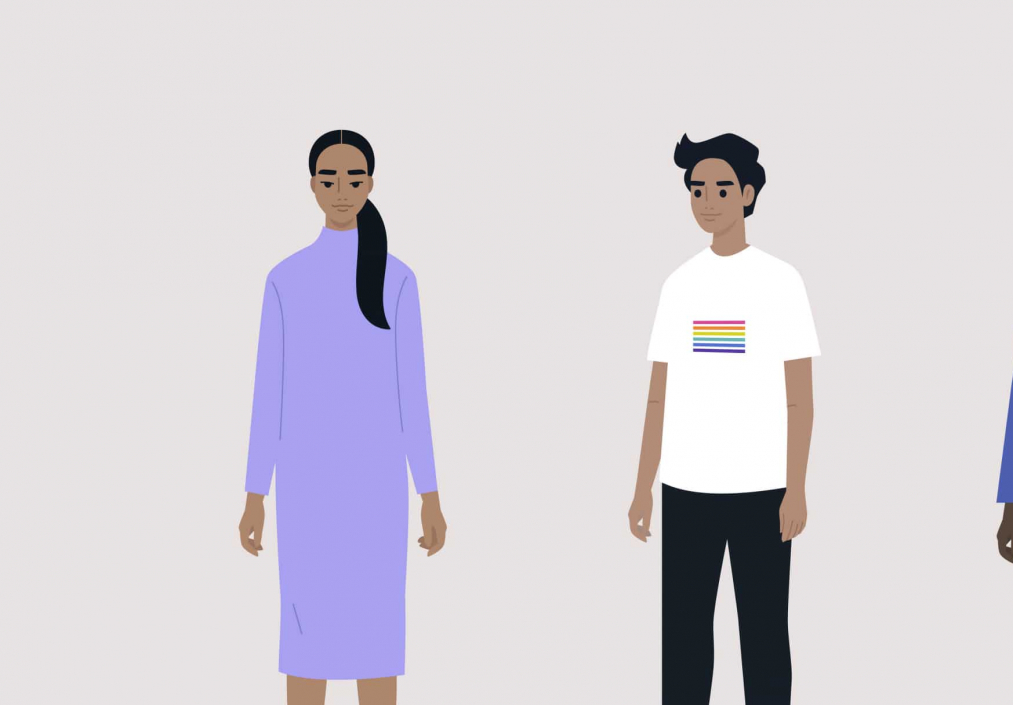 She/they or he/they, these mixed pronouns or pronoun pairs can feel affirming for many non-binary people

You may have noticed that some people put “she/they” or “he/they” in their social media bios, email signatures, or other platforms. These mixed pronouns or pronoun pairs can feel affirming for many non-binary people.

Why Do People Use Mixed Pronouns or Pronoun Pairs?

Not all non-binary people feel at ease using they/them pronouns. It makes sense why that would be. Less than twenty states in the United States will legally accommodate trans or non-binary folks who would rather have a gender marker that’s not “M” or “F” on their identification documents. Transphobic comments from people with major platforms can also be a deterrent. For example, former relatively unknown professor Jordan Peterson who became known for his conservative and transphobic views, regularly questions peoples’ pronouns, perpetuating harmful misconceptions.
Safety can also be a significant issue. Physical spaces like bathrooms and changing rooms are still unsafe. These spaces segregate people due to traditional ideas of binary gender.
There is another reason some non-binary people don’t use “they/them” pronouns. It’s because of their association with gender neutrality. However, there are many ways to be non-binary, and being gender-neutral is not the only way. Many people associate gender neutrality or androgyny with being thin and white.

“So much of the trauma and violence I moved through, and resilience and power I embodied is that of Black womanhood and Black femininity. In acknowledging that, I chose to use she/her pronouns because those pronouns were not afforded to me, and they are a derivative and gift of the time I spent in crafting my Black femme-ness in a world that denied me to do so. They represent the work and fight I put into my Black girlhood/womanhood within my alignment of gender expansiveness.”

Shackelford uses she/they pronouns because they have noticed how being non-binary and androgyny in our culture is shaped by normative views of whiteness, thinness, and masculinity.

“I don’t like using they/them pronouns because it feels so foreign to me. It’s really no shade to those who have found a home in they/them, but more so calling into question the terms’ gender neutral’ and ‘neutrality in a world where nothing is neutral or objective, and often all defaults are based in masculinity and whiteness.”

What Does It Mean When Someone Uses a Mix of Pronouns Like She/They or He/They?

Some people may be confused if they are used to more common pronoun formats. For instance, like she/her/hers, they/them/theirs, he/him/his.
Ada Powers has an excellent thread about this subject on Twitter. Here is a summary of these ideas:
A pronoun mix like he/they or she/they is generally shorthand for “I use both he/him/his and they/them/theirs pronouns.” In other words, listing two pronouns means they can generally be used interchangeably. However, preferences are different for every person.

How Do You Use These Mixed Pronouns or Pronoun Pairs?

You can use these pronouns in various ways. You can incorporate both into a sentence, use one or the other, or alternate between the two. A good rule of thumb is to ask the person what they would rather you use.

Pronoun pairs can communicate various nuanced ideas. For instance, she/they may imply that the person identifies as a woman and non-binary. They may feel womanhood tells the majority of their story. However, they may not fully relate to or experience this identity.

Another person may be fine with she/her, but also appreciate when someone uses they/them. They may prefer they/them but do not have the energy to keep correcting people. They may feel comfortable enough with the “closest” binary pronoun to their identity. It can also mean that the person actually uses they/them pronouns but won’t be offended if you use she/her.

The person may also be predominantly non-binary. They may want you to recognize their masculinity or femininity. Also, they may want to be included with men in contexts where a gender binary occurs.

If someone tells you they have mixed pronouns, and you are still unsure about how they work, you can always ask if someone would rather that you use one over the other. Then, you will use the pronoun that the person has said feels best for their identity.

In essence, you can’t know someone’s personal experience of their gender from pronouns alone. In any case, you can almost always respectfully ask for someone for clarification about your pronouns to ensure you are getting it right.

Many people may assume that being non-binary and “they/them” pronouns are inextricably linked. However, when we think that way, we overlook non-binary people who do not use they/them pronouns. It also excludes non-binary people from being affirmed for their gender identity.