Personal pronouns are something we use in our language every day. For example, they, them, he, and she is all personal pronouns. Pronouns serve the purpose of allowing us to talk about ourselves and other people, as well as things.

Sometimes pronouns are explicitly used for specific genders. For example, sometimes “she” is specific to females, and “he” is sometimes specific to males. However, since gender is not binary, if someone doesn’t identify as a cisgender woman or man, they might use a gender-neutral pronoun like they/them.

What Is the Gender Binary?

The concept of some people believing that there are only two genders is called the gender binary. However, gender is a whole spectrum of identities. People who do not feel like they identify within the gender binary gender non-conforming people or can go by terms like genderqueer, non-binary, non-gendered, gender-creative, genderless, bigender, and agender. Non-binary can use any pronoun to describe their identity, not just they/them.

Non-binary people can identify as various types of identities. We cover this in our article: What are the Types of Non-Binary Gender Identities?

In essence, gender identity is formed by how a person feels, not just by their gender expression or how they speak and act.

How Do You Use They/Them Pronouns?

Many times, people make assumptions about other people’s gender based on their appearance or name. Then, they will use a pronoun that they assume to be true. Whether or not they are correct about the pronoun, the act of making the presumption can be harmful. For example, it says that people need to look a specific way to show their gender.

If a person shares their pronouns with you, it intends to put an end to the culture of making assumptions about gender.

A person who uses “they” pronouns is usually referred to by using “they” and third-person pronouns. “They/them” pronouns are singular and refer to one person and are conjugated the same way as a plural pronoun of “they”; for example, “they are.”

Also, some may use “themself” over “themselves,” although both are usually okay.

The use of the singular “they” about one person has a long history in the English language. It has also recently been included more in modern dictionaries and style guides. In these guides, it is appropriate to use “they” to refer to an individual whose gender is unknown. It is also acceptable to use it when speaking about a person who uses “they/them” pronouns.

As mentioned in our previous article: What Are Mixed Pronouns or Pronoun Pairs like She/Her and He/They? some people go by mixed pronouns. Whenever you’re in doubt, you can ask the person.

What Happens if You Meet Someone New and You Don’t What Pronouns to Use?

If you are unsure about someone’s pronouns, all you have to do is ask them. If you meet someone new and you’re not sure about their gender, you can ask them what pronouns they use.

Also, keep in mind that it can be harmful to ignore someone’s pronouns or make assumptions about them. Everyone wants to be accepted for their true identity and respected in the process. 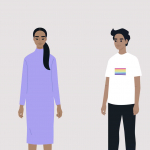