Menu
Search
Until the mid-1900s, queer was used to define anything outside the norm. However, by the 1920s, some individuals, mostly gay men, started using this term to describe their sexual orientation

Queer is an umbrella term that describes sexual and gender identity other than cisgender or heterosexual. For instance, individuals who are lesbian, gay, transgender, or asexual may identify as queer.

Unfortunately, people have been using this term as a slur against individuals whose sexuality and gender identities do not align with their expectations.

However, today, most people proudly use the term “queer” to describe their gender identity or sexual orientation.

That being the case, there are those individuals under the LGBTQ+ community who still see this term as an offensive slur. Therefore, before using this term on anyone, it’s advisable to ensure that they are okay with it.

History of the Term “Queer”

Until the mid-1900s, queer was used to define anything outside the norm. However, by the 1920s, some individuals, mostly gay men, started using this term to describe their sexual orientation.

By the 1940s, people started using this term in a disrespectful manner referring to “sexual perverts” or “homosexuals.” The number of people using the term “queer” as a disrespectful slur increased during the Cold War. Today, some people still use this term to describe LGBTQ+ individuals negatively.

At the beginning of the 1980s, LGBTQ+ individuals in academia and politics began to use the term and condemned those who used it disrespectfully.

Other individuals and organizations have purposely used the word “queer” to challenge the traditional view that being in opposite-sex relationships is normal (also known as heteronormativity) in fields such as health, religion, and immigration.

To understand “queer” better, here are frequently asked questions with answers to help you have a broader understanding of the term.

What Does the Term Mean?

The term “queer” is an umbrella term to describe both orientations and a community among the LGBTQ+ community.

Is This Term an Insult?

Most people are familiar with this term as it has been used in a derogatory manner. However, the term “queer” has been reclaimed by the community and has created a sense of community.

Who Identifies as Queer?

According to Amanda Pasciucco, AASECT certified sex therapist; queerness encloses an intersection of identities. She adds that queer refers to individuals who identify as either lesbian, gay, bisexual, transgender, queer or questioning, intersex, asexual people, also known as the LGBTQ+ community. The + sign can also refer to the queer community indicating pangender, pansexual, and those in relationships not within the social norms, such as polyamory, kink, among others.

However, Pasciucco says that the word queer varies depending on who answers the question. Not all in the LGBTQ+ community prefer to use the term queer. The term itself is vague, and with its vagueness comes more differences.

Is Queer a Sexual Identity or a Gender Identity, or Both?

Queerness is more than just sexual orientation or gender identity. It’s more of a dynamic and fluid movement that is not within the cisgender norm and hetereonormativity.

In other words, queer is a term that clarifies that one is not straight and ties them to a larger group without categorizing them as gay. Queer as an identity is for those outside the heterosexual binary. It is meant to be inclusive and create a sense of acceptance.

What are the Challenges that Queer People Experience?

People, especially young adults who are queer, experience discrimination, stigmatization, and rejection which can negatively affect their general lifestyle and health. These people may develop suicidal thoughts, substance abuse, depression, among other harmful traits that may threaten their health and life.

Research states that youth who identify as LGBTQ+ members experience higher rates of harassment and victimization, among other challenges than heterosexual youth, leading to higher mental health cases.

Discrimination and victimization are always a great challenge for LGBTQ+ youth since they also occur in social settings, schools, families, and faith-based communities. This poses a great challenge since these youths cannot access the appropriate services and support. 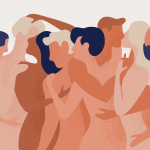