Menu
Search
Gender expression refers to how a person represents themselves to the world. It can be through dressing code, mannerisms, hairstyles, voice, body language, voice, and pronouns.

Gender expression refers to how a person represents themselves to the world. It can be through dressing code, mannerisms, hairstyles, voice, body language, voice, and pronouns.

For decades, people have believed that sex and gender are binary, which means that there are only two genders: male or female. However, in recent years, there has been an increased understanding that gender expression may not match someone’s sex.

That being the case, there are still cultures worldwide that have a strong belief in what certain genders must express themselves through voices, hairstyles, dressing codes, among other things. Individuals belonging to these cultures who do not express their genders according to society’s expectations are subjected to bullying, harassment, discrimination, and isolation.

With this in mind, it’s evident that one’s gender identity cannot be assumed based on how one looks since gender and sex are two different things. Sex refers to one’s biological traits, while gender refers to an individual’s social and cultural traits associated with femininity, masculinity, and nonbinary identities.

As earlier said, gender expression refers to how one expresses the aspect of either male or female. It may also entail traits that may be described as:

Remember that some of these gender expressions are influenced by societal and cultural stereotypes; hence they can change from time to time. The way that we dress, behave, and our body language is based on how society believes we should regarding someone’s sex. However, the way someone is expected to carry themselves can hinder people from expressing their gender according to how they really feel inside due to the fear of stigmatization.

Other people identify strongly with certain gender while others have mixed feelings. How someone feels from the inside regarding their gender may not match with their external gender expression. A particular person may be born male but identify themselves as female though they might continue behaving like a male.

People who behave or express their gender differently from what they are expected based on their assigned sex at birth are at high risk of facing bullying and other forms of stigmatization. In this case, trans people and gender-nonconforming are most likely to experience more discrimination.

Expressing gender through dressing, appearance, make-up, among other external behaviors, can help one have a better sense of belonging. However, due to fear of violence, discrimination, and victimization, most individuals do not express themselves as they would love to. This can lead to other health issues such as mental problems and general well-being.

Gender expression can also play a major role in the health care that people receive. Individuals whose gender expression does not match the sex they were assigned at birth are mostly discriminated against by health providers, which negatively impacts access to health care and quality of the same.

What to Do If You Are Struggling With Gender Expression

Most people struggle with gender expression issues. The following tips might help you on how to go about it.

Talk to a Professional

Talking to a gender-affirming mental health practitioner can help you develop ways to express your gender in a manner that will lower the chances of discrimination.

Come Up with Ways to Express Yourself

Having people who understand you around you can help a lot. If family and friends are not supportive, look for support groups that match your requirements in your area.

How to Help People With Gender Expression Issues

If you know someone whose gender expression is different from what society expects, there are some things that you can do to ensure their safety. They include:

Do not shy away from standing up for people with gender expression issues. If you hear any negative sentiments against them, advocate for them and help other people understand them.

If you are unsure about the correct pronouns, it’s advisable to ask instead of assuming, only to offend them unintentionally.

Support is critical in these cases; it ensures that not everyone is against gender expression that does not match someone’s sex, and other people are understanding and supportive. 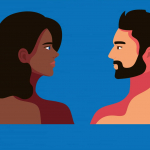