“Outing” is when someone discloses the sexual orientation or gender identity of an LGBTQ+ person without their consent. Outing creates issues of privacy, choice, and harm. In addition, outing can sometimes be publicized. For instance, someone can out prominent figures like well-known politicians, athletes, actors, singers, and more. Those who oppose LGBTQ+ rights have used outing in this way as a controversial political tactic. To avoid being outed, an LGBTQ+ public figure may feel forced to come out publicly first.

Outing is a harmful act that can traumatize the person being outed. It can also lead to someone experiencing violence or putting them in dangerous situations. Even if the risks aren’t that severe, it’s still not acceptable to share someone’s identity without their consent. Outing can even be illegal in some instances. Like, if a school outs a student to their parents, caregiver, or family.

It’s always best to proceed with caution when talking about someone’s LGBTQ+ identity, especially since this person may not be comfortable being “out” in certain situations, like school, work, or at home.

According to Statistics from Stonewall, 1 in 7 transgender people are not open about their gender identity to people in their family. In addition, 51 percent reported hiding or disguising their LGBTQ+ status at work because of fear of discrimination.

In addition, 2 in 5 trans people have experienced a hate crime or incident because of their gender identity in the last year. About 4 in 5 won’t report these crimes to the police. Essentially, outing can have dangerous and even deadly consequences.

What Can You Do to Make Sure You’re Not “Outing” Someone?

Here are some tips on avoiding outing someone:

Be mindful of confidentiality and disclosure

While some LGBTQ+ people may feel comfortable disclosing their history, some may not. A person’s gender or sexual orientation is personal information and is not something to casually share, speculate, or gossip about. This is considered to be an invasion of privacy and can have detrimental consequences like a person losing their jobs, housing, friends, or at its most extreme, their lives.

Be sure to think before you speak

When talking about someone you don’t want to “out,” be sure to think before you speak. While you may not be talking about their identity at that moment, there can be certain things that give it away, for example, their pronouns. If you aren’t sure how to proceed, you can change the subject, brush off questions, or avoid talking about them together.

Talk to your loved one

Be sure to discuss with your LGBTQ+ friend if they are out and what lines to stay within. If you have any questions about who you can talk to about their identity, ask them to clarify.

Always remember that it’s not your identity to share

It is essential to remember that whatever your friend or family member shares with you, it is not your information to share. If you need to talk to someone about your friend, family member, or loved one’s identity, you can always discuss it with a confidential person like a therapist or school counselor. In addition, you check with your loved one and ask if there is anything you can talk to about their identity.

What Are Some Examples of “Outing” in Popular Media?

Some of the most famous examples in the media for “outing” LGBTQ+ people include the following:

It is always an excellent idea to support an LGBTQ+ person, no matter what stage they are at with their identity. However, it’s never acceptable to “out” someone.

If you want to educate yourself further, be sure to browse through our Communities section on LGBTQ and ALL. 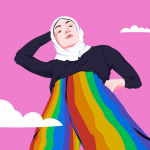 Stephen Nelson is a writer and musician based in Western Canada. They share an equal passion for the arts and the outdoors. Stephen is non-binary and uses he/they pronouns.