Menu
Search
Asexuality is an umbrella term. It refers to asexual people (aka Ace or Aces) that may have little or no interest in sex

For this installment of all about the LGBTQ+ acronym series, we will be discussing the letter “A” for asexuality.

Asexuality is an umbrella term. It refers to asexual people (aka Ace or Aces) that may have little or no interest in sex. They may want emotional relationships and intimacy. There are many ways asexual people can define their identity.

There is nothing wrong with not experiencing sexual attraction. Since sexuality is a spectrum, asexuality is part of many people’s stories.

Some examples of asexual identity include:

Grey-A: People who identify between asexual and sexual.

Demisexual: People who are attracted to someone after a strong emotional connection.

Queerplatonic: People who experience a non-romantic relationship with an emotional connection. It is more than just a traditional friendship.

Aces can use terms like hetero, homo, bi, and pan in front of the word romantic. That way, they can figure out how they are attracted to someone. For example, a hetero-romantic person might be interested in someone of a different gender, but not sexually.

Should I Use the Term Asexual?

Like with any label, the choice is yours on how you want to identify. Some people may prefer not to use a label.

Not all asexual people have the same experiences or preferences. Sexual exploration is your experience alone. Follow your intuition and see where it guides you.

Do Asexual People Have Sex?

Every person is different, but some asexual people do have sex. Some asexual people enjoy it or do it for their partner’s pleasure. Some do it to conceive. There are many other reasons, it’s specific to the person.

Many asexual people may have sex often in a relationship. They will do so to experience bonding with their partners.

I Get Aroused but Not by People. Does That Mean I Am Asexual?

Asexual people can have libidos or become aroused. However, they may not want sexual relationships with others.

Can You Be in Love if You’re Asexual?

Asexual people experience romantic feelings for people. Since this fact is true, it means that they can fall in love. However, the attraction is not sexual; instead, it has more to do with a person’s personality.

Many asexual people identify as heteroromantic, homoromantic, biromantic, and panromantic. On the other hand, some asexual people describe themselves as aromantic, which means they do not have romantic feelings for anyone at all.

It depends on the individual since asexuality is such a spectrum. There is no one way to be asexual, and every form is acceptable.

Myth: Asexuality is a choice.

This misconception occurs because some people do not see asexuality as an actual sexual orientation. Asexuality can also be misrepresented as celibacy, being an incel, or abstinence.

Many asexual people aren’t interested in having sex due to their sexual orientation, and it is not due to their beliefs about sexual behavior. Asexuality is not a choice because of the inability to find a partner. It also is not a choice, like being gay or straight isn’t one.

Myth: Asexuality is a mental or physical illness.

The claim that asexuality is a mental or physical illness is harmful. It can lead to incorrect diagnoses of asexuality and can cause asexual people to take unnecessary medications. Some medical professionals or family members may even try to convert them.

There are disorders like Female Sexual Interest/Arousal Disorder and Hypoactive Sexual Desire Disorder that can be confused with asexuality. The significant difference is that people who have this disorder are bothered that they do not have a sex drive. In contrast, asexual people are not bothered by this.

Some people even think this disorder is controversial in general. It can also make asexual people feel worse about not having this desire and cause them to be isolated from society.

Myth: Asexual people are against sex.

Myth: There aren’t many asexual people out there.

Since there isn’t much visibility and representation in society, many people believe that there are not many asexual people worldwide. However, this fact could not be further from the truth. Approximately 1% of the population (tens of millions) is asexual.

There needs to be more research regarding asexuality in the future. There are likely even more asexual people than this statistic.

For more information about asexuality, you can read about it online. Be sure to talk to other members of the asexual community through safe spaces online. There are forums like the AVEN forum and the Asexuality forum on Reddit that are helpful for asexual people. These resources are also excellent for those who believe that they might be asexual and want to learn more. 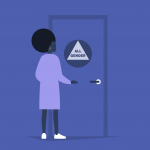