Menu
Search
A bunch of celebs have already taken the opportunity to share their authentic selves in 2021. It's nice to see celebrities sharing their LGBTQ+ identities in the world and being accepted and supported by their fans

Now that we’re nearly into summer, a bunch of celebs have already taken the opportunity to share their authentic selves in 2021. It’s nice to see celebrities sharing their LGBTQ+ identities in the world and being accepted and supported by their fans.

This past March, Demi Lovato came out as pansexual. They have always been open about their sexuality. However, this year they revealed their pansexual identity on a podcast (The Joe Rogan Experience).

Here’s what Lovato had to say about pansexual being the right label for them:

“I also don’t know if I’m going to end up with a guy, so I can’t really see myself maybe getting pregnant,” Lovato said. “I’m so fluid now — and a part of the reason why I am so fluid is because I was super closed off.”

Update: Demi Lovato has come out as non-binary and uses they/them pronouns.

My cousin got me a new shirt pic.twitter.com/DuHhgRto7b

JoJo Siwa, known as the breakout teenage pop star from “Dance Moms,” came out as queer this year. On TikTok in late January, she posted a video dancing to Lady Gaga’s Born This Way.” She then followed the video up with a photo on Twitter wearing a T-shirt that read, “Best. Gay. Cousin. Ever.”

JoJo Siwa said that her girlfriend, Kylie Prew, encouraged her to come out to her fans.

“I like queer. Technically I would say that I am pansexual because that’s how I have always been my whole life is just like, my human is my human.”

Bachelor star Colton Underwood announced he was gay on Good Morning America this April. Even though he denied his sexuality before, he decided to announce it to Robin Roberts. Here is what he said during the interview:

He said on Good Morning America that he’s known since he was younger but prayed that he could be straight. He also mentioned that he had suicidal thoughts before coming out.

During his season of the Bachelor, Underwood was dating Cassie Rudolph. They broke off their relationship in 2020 after Rudolph filed and dropped a restraining order against him. Underwood said during his interview that he did love Rudolph, but he could have “been courageous enough to fix myself before I broke anybody else. I’m still the same Colton everybody met on TV. I’m still the same Colton to my friends and my family, I just happen to be able to share with people now all of me. And I am proud of that, you know? I am proud to be gay.”

Country music star T.J. Osborne came out as gay in February. He is the vocalist in the group Brothers Osborne. T.J. Osborne announced he was gay in Time Magazine. He said he’s known for years but kept it a secret since country music fans can be very conservative.

Here is what Osborne had to say to Time Magazine:

“People will ask, ‘why does this even need to be talked about?’ and personally, I agree with that. But for me to show up at an awards show with a man would be jaw-dropping to people. It wouldn’t be like, ‘Oh, cool!'”

In April, musician Kehlani announced she was a lesbian on Instagram Live. She has always been a queer icon, using she/they pronouns and identifying as pansexual. However, this year she has come out as a lesbian. Here’s what she had to say during an interview with The Advocate:

Ronen Rubinstein, star of 9-1-1: Lone Star, announced he was bisexual this past April. He attributed coming out to his gay character on 9-1-1: Lone Star, which made him more comfortable with his sexuality. Once Rubinstein discovered that his fans were accepting of his character’s sexual orientation, he came out in a Variety interview. Here is what he had to say:

He also said how his current girlfriend helped him confront his sexuality and supported him during the coming out process.

Emma Corrin plays Princess Diana on Netflix’s highly renowned series, The Crown. On an Instagram post in April, Corrin referred to herself as “ur fave queer bride.” The post was from a feature in Pop Magazine. Many of her fans noted that post as a public coming-out moment for Corrin. 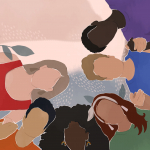