What is a TERF?

The word TERF stands for “trans-exclusionary radical feminist.” It describes people who refer to themselves as feminists but who exclude the rights of transgender people. They especially exclude rights for trans women.

Where Did the Term TERF Come From?

The term was coined in 2008 by activist and writer Viv Smythe. She was describing what she viewed as a trans-hostile movement and noted that it was gaining momentum in the British media. She wrote in The Guardian that this term she invented has “been weaponized at times by both those who advocate trans-inclusion in feminist/female spaces and those who push for trans-exclusion from female-only spaces.”

It then gained traction online.

The origins of the term are based on feminist philosophy from the 1970s. During this time, radical feminist circles wanted to find a word to separates the feminist who support transgender women and those who do not.

Many feminist groups called for separate spaces where men and women could gather and organize. Radical feminist circles got into debates on whether they should include transgender women.

The feminists against including transgender women referred to themselves as “gender critical feminists.’ This term is still used presently.

TERF’s and gender-critical feminists have also advocated against gender-affirming care for trans and gender non-conforming people. The belief behind this is that trans people should not exist, and cutting off their health care would do so.

Because of sentiments like this, there has been a negative impact on transgender healthcare in the United States. For example, many insurance companies have not covered gender-affirming care for decades. Physicians in the past have refused to provide HRT to trans and gender non-conforming individuals looking for hormone therapy.

Luckily, in recent years, both insurance companies and Medicaid are covering gender-affirming care.

These views can come about when people have misconceptions about transgender people. For instance, TERFs may claim that trans women are not women. They may believe that non-binary people do not exist. They may also aim to exclude trans women from “women’s” spaces. TERFs have also been known to be in opposition to trans rights legislation. For example, the US Equality Act or the UK Gender Recognition Act.

What Kinds of Women’s Groups Have These Beliefs?

Many women’s groups who have these beliefs have been associated with pro-Trump conservatives.

One example is the case of Aimee Stephens. She was a woman fired from Harris Funeral Homes after she came out as trans. This incident brought the first transgender civil rights case to the Supreme Court. The Women’s Liberation Front (WoLF) created a brief about the case that read: “Aimee Stephens is a man.” This brief featured many ideologies that TERF’s use.

Why Do These Groups Hold These Misconceptions About Transgender People?

Since these groups believe trans women are just men, they see them as a threat to cisgender women’s safety. These ideas invalidate the experience of trans people. It prevents them from being their authentic selves and to lose autonomy for their gender expression.

Some people do not understand the difference between gender and biological sex. Many TERFs believe that there are only two “biological sexes,” even though researchers have debunked this.

Which Public Figures Have Been Labeled a TERF?

Arguably the most famous public figure labeled as a TERF is author J.K. Rowling of the Harry Potter series.

Her tweets came under fire in early June 2020 for controversial statements about the transgender community. Her views have caused previous fans and stars of the Harry Potter films like Daniel Radcliffe, Emma Watson, and Rupert Grint to speak out against her.

Rowling had retweeted an op-ed piece that discussed “people who menstruate.” She was offended that the word women was left out. Her tweet read: “People who menstruate.’ I’m sure they’re used to be a word for those people. Someone help me out. Wumben? Wimpund? Woomud?”

Other Offensive Tweets from Rowling

That tweet created a lot of backlashes. However, Rowling didn’t stop and wrote her views in greater detail.

“If sex isn’t real, there’s no same-sex attraction. If sex isn’t real, the lived reality of women globally is erased. I know and love trans people, but erasing the concept of sex removes the ability of many to meaningfully discuss their lives. It doesn’t hate to speak the truth.”

“The idea that women like me, who’ve been empathetic to trans people for decades, feeling kinship because they’re vulnerable in the same way as women—i.e., to male violence—‘hate’ trans people because they think sex is real and has lived consequences—is nonsense.”

“I respect every trans person’s right to live any way that feels authentic and comfortable to them. I’d march with you if you were discriminated against based on being trans. At the same time, my life has been shaped by being female. I do not believe it’s hateful to say so.”

These comments have shown that Rowling is making fun of gender-inclusive terms and preventing young trans people from receiving gender-affirming care. These statements and tweets have alienated many fans, much of the LGBTQ+ community, and celebrities.

An Anti-Trans Book from Rowling

To make matters worse, Rowling has recently published a novel called “Troubled Blood.” It is about a male serial killer who wears dresses to attract cisgender female murder victims. Many view the book as anti-trans and that the rhetoric is harmful.

The trope of a “male killer wearing a dress” insinuates that transgender women are violent murderers. This trope has been used in films like “Silence of the Lambs” and “Psycho.”

Is TERF a Slur?

Recently, people who have been described as TERFs online have claimed it to be a slur. Some have gone so far as to say it is hate speech. Instead, they think the term gender-critical is more suitable.

However, for a term to be a slur, it must have three components (according to a paper published in 2020 by linguists Christopher Davis and Elin McCready:

TERF only satisfies the first condition, fails the second, and the third is debatable. The term continues to be debated on whether or not it is a slur. In essence, to some, TERF is a slur; whereas to others, it is descriptive. 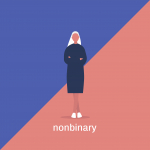